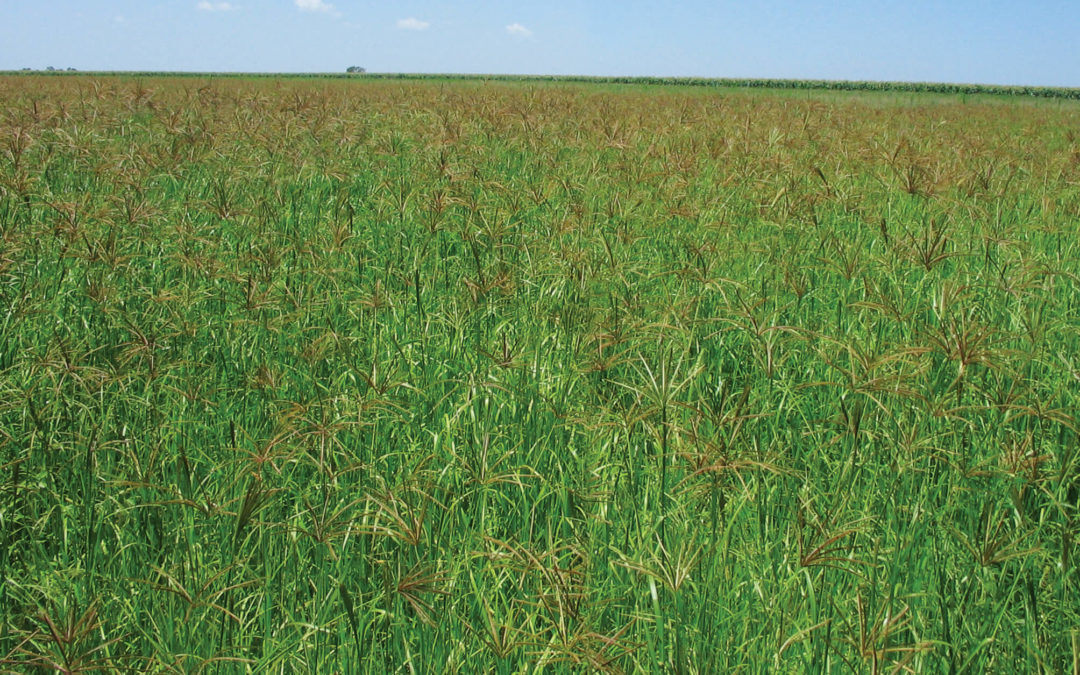 Smutsfinger grass (Digitaria eriantha) is a well-known perennial summer grass species that is valuable in any grazing system.
There are several successful Smutsfinger plantings in the summer rainfall region that can testify to its success.
Smutsfinger grows well in areas with an annual rainfall of 500mm and more.
It is a sweet grass that maintains its palatability until late winter, regardless of severe frost – a property making it an outstanding feed source in the winter months.

Slow establishment:
Smutsfinger however has an inherent dormancy that makes it more difficult to establish than other grass species.
The latter is the reason why pure Smutsfinger plantings can take up to three years to establish.
The problem can be overcome by planting Smutsfinger in combination with other grass species.
In the past farmers erroneously combined Smutsfinger with Eragrostis tef.
While it can present a short-term solution, it can have disastrous long-term effects.
When Smutsfinger is combined with tef, the result is an undesirable mixture of sweet and sour grasses that can lead to unpalatable pastures and selective grazing.

Right combinations:
The tef component can also be the source of undesirable perennial Eragrostis species such as weeping love grass (Eragrostis curvula – Oulandsgras) and tough love grass (Eragrostis plana – taaipol).
It is therefore important to combine Smutsfinger with the right species. Thus a mixture of Smutsfinger in combination with Rhodes grass (Chloris gayana) and white buffalo grass (Panicum coloratum) is recommended.
Rhodes grass is a tufted perennial grass that easily forms roots and can quickly cover the soil. White buffalo grass also is a perennial erect-growing tussock that spreads itself through long, creeping stems.

Advantages of the mixture:
• It can be grazed during the first season, unlike pure Smutsfinger pastures that can only be grazed in the second season.
• The three species are all palatable perennial grasses with good digestibility that can be utilised as hay or grazing.
• The species complement each other, as Rhodes and White buffalo grass becomes well-established quickly. The latter suppress the emergence of weeds, offering the Smutsfinger component a weed-free foundation to establish itself over a period.
• The mixture is suitable for most soil types and grows exceptionally well in areas with an annual rainfall of 500mm and more in the summer rainfall regions.
• With the right management practices dry matter production can be as high as 18 tons/ha under irrigation.
• It is easy to manage the established mixture, because management is based on general Smutsfinger management practices.
• The mixture also combines well with legumes such as sweet white clover.

Advantage of legumes:
• Legumes are binders of nitrogen (N) with obvious advantages to dry matter production.
• Legumes are more digestible and palatable and can even increase the average percentage of crude protein if it is utilised as winter feed.

Legumes recommended for the mixture will differ among rainfall regions:
• In regions with an annual rainfall of 500 to 650mm, hardy legume types (taproot types) such as sweet white clover, are recommend.
• In areas with rainfall of 650mm+, other types of legumes such as spearclover (adventitious root type) can be considered for the eastern regions.